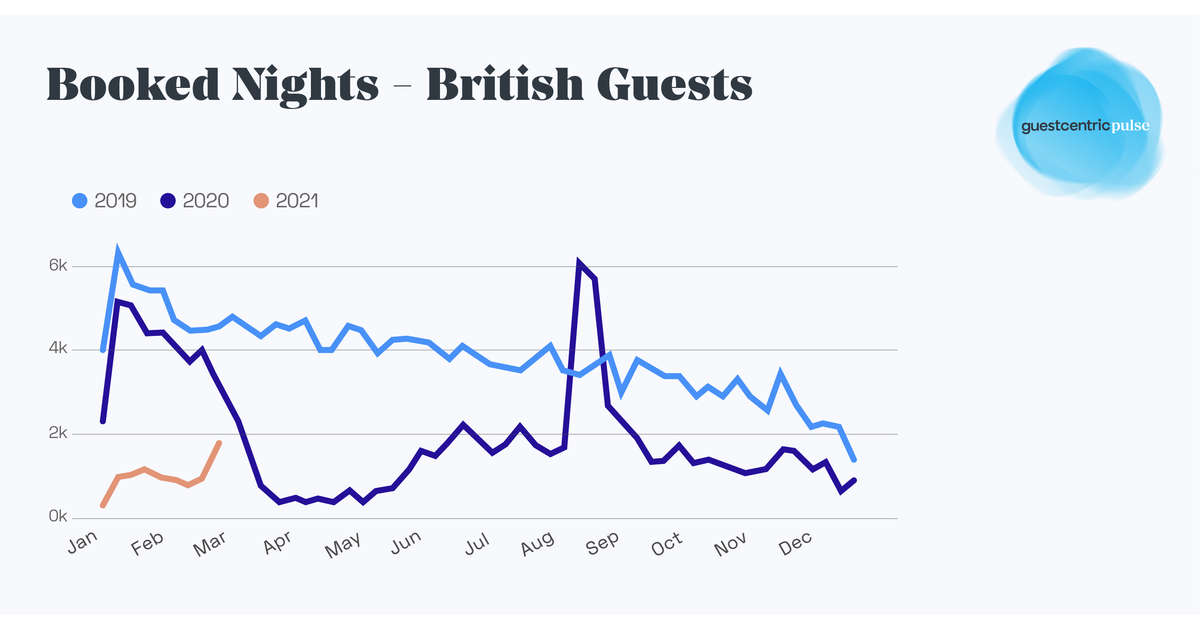 Hotel bookings reach near 2019 levels after UK and US reopen

Rapid vaccination distribution and partial reopenings in the US and UK have triggered a significant increase in hotel bookings to near 2019 levels.

With vaccine deployment well underway, the UK has embarked on the first phase of the roadmap to reopen the country’s economy. As reported by the BBC, schools and colleges reopened on March 8. There could be up to 10,000 people allowed in stadiums by May 17, while the target date for the return to normal (including nightclubs!) Is June 21.

This has not only led to a massive increase in airline bookings, but Market data published in the March 2021 edition of The Hotelier PULSE Report also shows a significant increase in hotel bookings from UK customers. On February 23, a day after British Prime Minister Boris Johnson announced the UK roadmap for reopening the economy, hotel bookings increased to 76% of bookings over the same period in 2020 .

However, hoteliers around the world remain concerned about flight capacity and the impact on hotel bookings. Aviation and tourism expert Gavin Eccles says air capacity will be plentiful if demand is constant.

Addressing the issue during the #hotelierPULSE COLLECTIVE panel in March 2021, co-hosted by Techtalk.travel, Guestcentric and Great Hotels of the World, he said:

â€œIf the demand is there, then the plane will be ready. What will be interesting is that the airlines have now had to implement a short-term planning model. If we lived in normal times, the airlines should really plan for summer 2022 correctly. now. However, the industry is forecasting summer 2021, which is only 3 months away. It goes without saying that the pandemic has prompted airlines and airports to increase their flexibility to respond to rapid changes in the market.

He continued, â€œThe airlines are good to go. Where we have a problem right now is with demand. Most consumers are reluctant to take the leap of faith to book now because they don’t know what might be available. But as we ‘I saw after the UK plan to reopen the economy, with a bit of positivity and confidence the market is booming. “

Also speaking at the event, Pedro Colaco, CEO of Guestcentric and Great Hotels of the World, added: “These signals indicate that consumers are ready and eager to travel again. It looks like a little piece of good news goes a long way in building confidence and bringing consumers back to the skies and back to hotels.”

“Recovery depends on a range of factors, from the number of new cases to how quickly we can achieve mass vaccination. Of course, there is still a long way to go until the whole world reaches it.” life back to normal “but the light at the end of the tunnel shines a little brighter every day”, he concluded.

About the Hotelier PULSE report

Since the launch of The Hotelier PULSE report series in April 2020, Guestcentric has interviewed hundreds of hoteliers on key issues that have remained at the forefront since the start of the Covid-19 crisis, such as occupancy, l ‘ADR, financial recovery, health and safety and redefining sales and marketing strategies for the future.

How to plan your next trip with a forest walk, flexible hotel reservations, pocket backpack options

Hotel bookings are strong, but the skills gap is widening in the tourism industry…