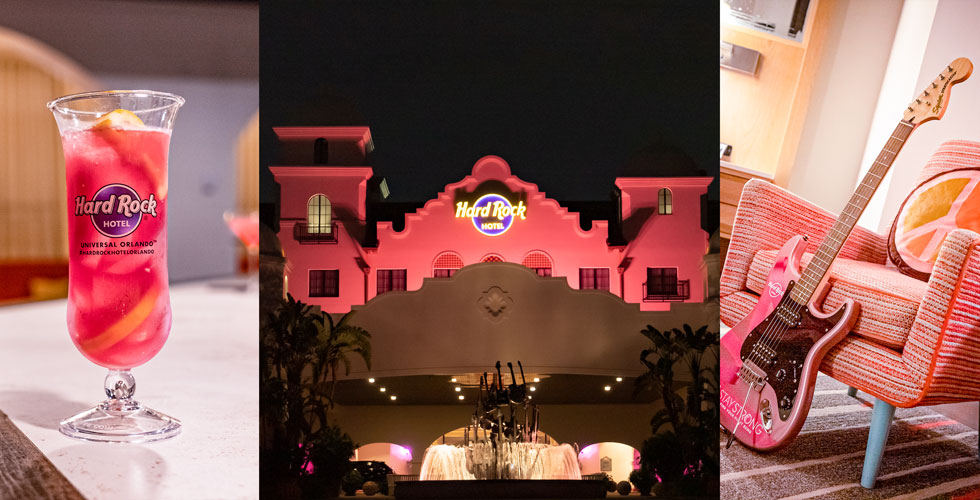 The Hard Rock Hotel at Universal Orlando Resort lights up pink in support of breast cancer awareness as part of Hard Rock International’s 23rd Global Pinktober Campaign. From the exterior of the hotel to some rooms outfitted in pink linens and pink guitars, the resort hotel shines brightly for a healed future.

Guests can expect Pinktober activations throughout the resort. The facade of Universal Orlando’s iconic Hard Rock Hotel is lit up in pink. Some rooms in the hotel also come with pink linens. Each night these rooms are occupied in October, the hotel will donate a portion of the room rate to the American Cancer Society. Pink co-branded Fender guitars have been added to the hotel’s Sound of Your Stay program. Guests can check out the guitars and scan a QR code to donate and learn more ways to support the fight against breast cancer.

Pink drink specials are available at the Velvet Bar, The Kitchen Restaurant, and the Beach Club.

Hard Rock is also launching a “Find Your Fight Song” social media contest. Through the power of music, Hard Rock wants to uplift those battling breast cancer, celebrate survivors and remember their loved ones by creating the ultimate Pinktober anthem. Fans are invited to participate by sharing their stories on Instagram and writing original lyrics to be considered for inclusion in the anthem written in collaboration with recording artist David Correy. One grand prize winner will receive a $5,000 prize and a donation of equal value in their name to the American Cancer Society.

You can find out more about this event and the ways you can participate, on the Hard Rock Pinktober website.