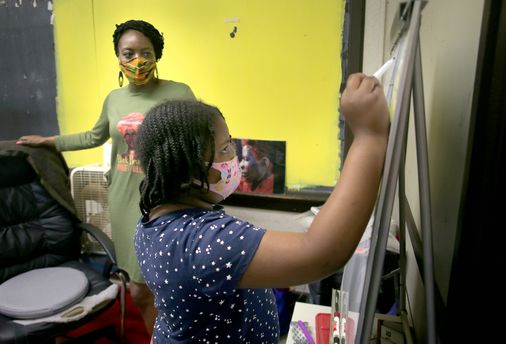 Paillant’s experience as a student of color with a teacher who looks like her and speaks her family’s language is a rarity in Boston Public Schools. Her school, Mozart Elementary, where 40 percent of students are white, stands out with a staff that’s nearly half Black or Hispanic, better reflecting its student body than most others. But district-wide, while 85 percent of public school students are children of color, only 40 percent of the district’s 4,570 teachers and guidance counselors are Black, Hispanic, or Asian American.

Despite a decades-old federal court order and myriad programs, the diversity of Boston’s teaching corps has barely budged in 10 years, during a period when the city saw an influx of Hispanic and other students of color. The district has some promising programs devoted to recruiting, developing, and retaining teachers of color, but their small numbers do little to improve overall diversity. From 2014 to 2020, teacher pipeline programs brought in 42 educators of color, a sliver of the 2,191 educators hired externally during that period; among the latter were 868 new teachers of color.

Critics say the district isn’t doing enough to expand its programs and diversify its teaching ranks.

“It’s a question of priorities,” said Miren Uriarte, a former Boston School Committee member. “There’s lip service to it, maybe even some effort, but there’s no commitment to making sure that it happens.”

Hispanic students face the slimmest chances of having an educator of their ethnicity. Hispanics are now 42 percent of the student population, up from 37 in 2007. But the percentage of Latino teachers ticked up to just 11 percent, from 9 percent, since then. Black students account for nearly 30 percent of students, while 23 percent of teachers are Black. And language gaps loom large in a district where nearly half of students are current or former English learners.

Racial gaps can hinder student achievement, and research shows that students of color who have teachers of their race or ethnicity are more likely to graduate high school and enroll in college. This may be due to the student being inspired by the teacher, seeing someone like themselves as smart and successful, and that teacher having higher expectations of them than a white teacher, experts say.

BPS has the highest portion of Black teachers among Massachusetts districts by far, but it still falls short of the 25 percent threshold that US District Judge W. Arthur Garrity imposed in 1974 during desegregation, which is still in effect. BPS acknowledges it only met that mark for about three years since 2000, between 2000 and 2005.

During that time, the BPS equity chief reviewed each hire and ensured that diverse candidates were considered, leading to 26 percent of teachers being Black one year, said Barbara Fields, BPS’s equity head at the time. She and other critics say the district has ceded too much hiring power to principals since the mid-2000s.

“If this were truly a priority, the district has the means to make it happen,” Fields said. “We’ve done it before.”

District officials say they do plenty to push schools to hire diverse educators, from requiring schools to set diversity goals, to building pipelines of quality applicants, to offering $1,000 signing bonuses for teachers of color. Starting this year, principals hiring white teachers must describe their efforts and challenges finding a candidate of color.

And the district celebrated last year hiring slightly more new educators of color, 127, than white ones, 123. School officials hope to turn that gain into a trend and build a different diversity picture over the next 10 years.

“I have to believe the next decade will be different,” said Ceronne Daly, director of BPS’s Recruitment, Cultivation, and Diversity office, although she could not predict when BPS will comply with the Garrity order or reach its goal of reflecting students’ diversity. She anticipates an upcoming wave of Black educator retirements. And other urban districts have seen teachers of color leaving in droves.

“To be able to tread water when peers across the country were losing large [numbers of teachers of color] is a plus,” Daly said. “I know it’s very frustrating for all parties, including BPS, to not see exponential 10, 15 percent jumps.”

Retention efforts are key, Daly said, as other school districts recruit BPS teachers of color. BPS employs 6 percent of teachers in Massachusetts, she said, but has almost half the state’s Black teachers and nearly one-quarter of its Hispanic and Asian American teachers.

The rest of the state is far less diverse: 92 percent of teachers are white. Boston has the lowest share of white teachers in the state, making it more diverse than all other districts including Cambridge, Brockton, and Worcester. But Holyoke, Lawrence, and Framingham have higher shares of Hispanic teachers.

The average salary for a teacher in Boston was $104,500 in 2018, third-highest in the state. But educators say the pay can be undermined by high housing costs, lengthy commutes, and difficult working conditions in underfunded schools.

Milord, the Haitian-American teacher, was a Boston public school student herself and says her life was changed by a Black teacher. At Boston Latin Academy, her ninth-grade English teacher forged connections with students and taught lessons that felt more relevant to their lives. Inspired, Milord suddenly saw teaching as a career for herself.

And to encourage more youths of color to enter teaching, Boston started a Teacher Cadet program in 2014 that coaches interested BPS students and graduates through college to land back in the district as teachers. So far none has returned. BPS remains in touch with eight college students.

Milord started teaching to pay for graduate school. Though it was tough work, she loved watching kids’ faces light up as they learned new concepts. Her next obstacle: the Massachusetts Tests for Educator Licensure, or MTEL. She paid for an expensive test-preparation course and to take the tests but initially struggled to pass.

Teachers in Massachusetts generally have to have master’s degrees, but early-career teachers can work having only a bachelor’s degree under provisional or initial licenses for potentially up to 15 years with extensions as long as they pass the required state MTEL exams.

The tests represent a major barrier to candidates of color: Close to half of Black or Hispanic candidates fail the Communication & Literacy Skills MTEL test, compared to 20 percent of white candidates, state data show. The disparities probably are driven by inequities in education opportunities and differing quality of preparation programs, researchers say. Some states have changed the tests or limited their importance to boost teacher diversity; Massachusetts legislators are considering a bill that would expand pathways.

In 2014, BPS started a “grow-your-own” program — Accelerated Community to Teacher — that helps candidates of color become teachers. With a focus on content knowledge, test-taking strategies, and confident mindset, the program has one of the highest MTEL passing rates for people of color in the state: 83 percent of its candidates of color pass the English as a Second Language exam, compared to 30 percent statewide. The free Saturday program, which partners with MIT Teaching Systems Lab, draws day-care workers, school paraprofessionals, substitute teachers, and after-school program staffers. Becoming teachers often doubles or triples their salaries, said Abdi Ali, director of teacher pipeline programs.

The program’s instructors are determined to get would-be educators of color to pass. Susana Lyons, 34, a Colombian immigrant now in her first year teaching a mostly Hispanic and Black third-grade class at Higginson-Lewis Elementary School in Roxbury, failed the tests twice before joining the program. She said she finally passed the exams after gaining not just knowledge, but confidence, thanks to the instructors.

“You have this system around you that’s telling you, ‘It’s OK, we’re going to get you to pass no matter what,’ ” she said. “I’ve never experienced that level of support before.”

The program produced 12 teachers of color in district classrooms this fall. This year, 54 candidates are enrolled, including 15 bilingual educators. Demand is high. If the program had more staff, it could serve 100 candidates of color each year, making a larger dent in teacher-diversity numbers, Ali said. This year, the district funds three staffers and spends another $88,900 on pipeline programs. Proponents say if BPS allocated more money and staff toward these efforts, it would boost the number of diverse educators in the district.

“These programs haven’t been taken to scale,” said John Mudd, an education advocate on BPS’s English Language Learners task force. “They could have a significant chance of moving the needle in terms of overall diversity.”

BPS said the educator-diversity office will receive an additional $1 million annually for the next three years in federal pandemic relief funds.

For years, turnover among educators of color has been higher nationwide than for white teachers. That trend has sometimes held in Boston, and the district works to retain diverse educators.

In 2019, 11 percent of Hispanic teachers and guidance counselors left BPS, compared to 8 percent of Asian and Black educators, and 7 percent of white ones, district data show.

There are many reasons behind the disparate turnover, national studies suggest, including a lack of classroom autonomy, poor working conditions, and feeling unsupported.

At Milord’s previous BPS school, the Henry Grew School in Hyde Park, where nearly all students were Black or Hispanic, her classroom materials were less advanced than those she has now at the Mozart, which has a whiter student population. Other schools are understaffed, forcing teachers to juggle multiple people’s jobs. These inequities especially disturb teachers of color, she said. Some quit.

“They don’t like to see the majority of students who unfortunately are getting the short end of the stick are the students of color,” Milord said.

To boost retention, BPS offers educators of color leadership coaching programs and affinity groups to support each other and discuss work or current events. Membership started small but has grown.

“Every week, they can come to a program where they can connect as a community and feel celebrated and affirmed,” said Rashaun Martin, BPS’s retention specialist for educators of color. “That is intentional work that the BPS just never did 10 or five years ago.”

BPS offers first-year teachers a teaching fellowship that costs participants $3,000 and provides mentorship, support, graduate-school credits, and an initial teaching license. Most of its 15 participants this year are Black and Hispanic.

At the Mozart School, principal Michael Baulier said it takes great effort to build a teaching force that reflects students. Baulier hired eight educators last year, seven of them people of color, through reaching out proactively to teachers of color in BPS’s online job-seeking system.

“Without intentional antiracism structures, the decisions would default to white supremacy culture every time, because it’s ingrained in the educational system,” Baulier said.

Milord has stayed at the Mozart since 2015 because she loves the school’s welcoming, appreciative culture, affinity groups, and focus on racial equity.

“This is the first school I’ve been at where we’re diving deeply into having these discussions,” Milord said. “That has an impact, when everybody’s raising our kids to be intentional in how we speak or what we do.”

Naomi Martin can be reached at [email protected]